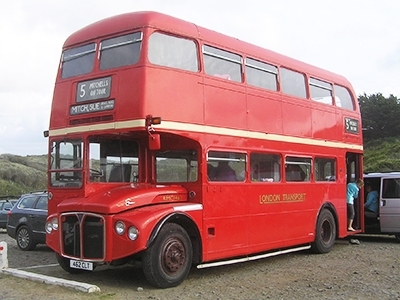 Introduced by London Transport in 1956, the Routemaster saw continuous service in London until 2005. Despite the retirement of the Routemaster it has retained its iconic status and currently remains on two heritage routes in central London. This has made it one of London’s most famous symbols, with much tourist paraphernalia continuing to bear Routemaster imagery.
The Routemaster bus was developed during the years 1947–1956 by a team directed by A. M. Durrant and Colin Curtis, with vehicle styling by Douglas Scott. The design brief was to produce a vehicle that was lighter (hence more fuel efficient) and easier to operate. The resulting vehicle could seat 64 passengers despite being three-quarters of a ton lighter than the preceding RT, which seated only 56. The first task on delivery to service was to replace London’s trolleybuses.

The Routemaster was primarily intended for London use, being designed by London Transport and constructed at the AEC Works in Southall, Middlesex. In all 2,876 Routemasters were built.

It was an innovative design and used lightweight aluminium and techniques developed in aircraft production during World War II. As well as a novel weight-saving integral design, the Routemaster also introduced (for the first time on a bus) independent front suspension, power steering, a fully automatic gearbox and power-hydraulic braking. The majority of production examples were 27 feet 6 inches (8.4 metres) long to meet the then maximum length regulations. The regulations were later relaxed and 30 feet (9.1 metres) “long” types were produced. The Routemaster outlasted several of its replacement types in London, the unique features of the standard Routemaster were both praised and criticised. The open platform, while exposed to the elements, allowed boarding and alighting away from stops; the presence of a conductor allowed minimal boarding time and optimal security.

There were several variants of the Routemaster produced, the classes were designated as follows:

RMC
The RMC was a coach version, produced for the “Green Line” routes. RMCs had modified suspension and interiors to allow a longer range and more comfortable running, were fitted with an electrically operated door instead of an open platform and was faster than the standard RM .
Page load link
Go to Top